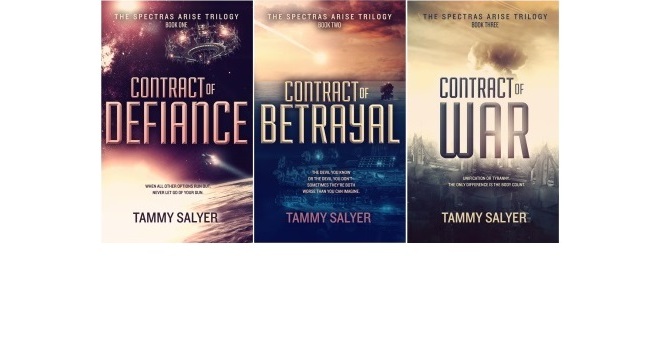 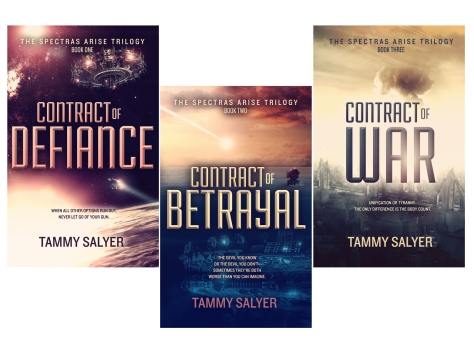 Contract of Defiance by Tammy Salyer

Book One in the Spectras Arise Trilogy

This is a well-written book, clean, with fast-paced action that rarely stops for breath and great description that doesn’t fear blood and gore. The military setting benefits from the author’s military background and there are interesting science and medical details science fiction readers will appreciate. Told in the first person (a point of view I don’t usually like) this one pulled me into the protagonist’s mind. Aly Erikson is a hard-ass soldier-turned-criminal and a mixed up mess. When a job goes badly wrong and her brother David gets captured by the Admin, she wakes up in the medical facility on the wrong ship with a crew who has their own objectives. All Aly cares about is finding her own crew so she can rescue David. The story that follows slowly reveals the political set up in this part of the universe providing a wide space opera backdrop for the rest of the series.

Aly Erikson’s development is great and distinctive for the amount of conflict she inspires. She’s impatient, aggressive, and just so slow to work out who to trust with her loyalty. A romantic angle is understated and although I would have enjoyed more emphasis on this, the plot develops the relationship well. I loved how Aly got so many backs up, and connected with so many others. She had to prove herself, demonstrate her true motivations by her actions and the choices she made. This girl has intelligence, guts, and grit. Character wise, my only criticism is that the back story for the captain/surgeon of Aly’s new crew needs a little more development to explain her combat skills, but I suspect there is more story to come. Overall, the characterization is well drawn and balanced, baddies as well as goodies, and everyone has their own peculiarity. The main antagonist is just plain scary.

Contract of Defiance is a great read, brimming with military strategy and tactics, masses of conflict and pistol-drawn battles, and a new galactic way of living to discover that caters for the privileged while suppressing the communities existing on its fringes.

Exciting, riveting stuff. I can highly recommend this book.

(Disclaimer: I received a copy of this book in exchange for an honest review. I also purchased a copy.)

View all my reviews

For three hundred years, the Pax Imperium secured peace throughout the galaxy. Now the empire teeters on the brink of collapse.

As war brews, the House of Athena expects Jonas to enlist. Unable to escape his gilded cage, the young prince accepts his fate. But when the factions come to blows, his secret affair with the daughter of a rival becomes a liability. As territory falls, Athena lays impossible demands on Jonas, and he is forced to choose between love and the ideals his family fights to preserve.

The Far Bank of the Rubicon is super-charged, adult science fiction from Erik Wecks, creator of the Pax Imperium and author of the critically acclaimed Aetna Adrift.

The Far Bank of the Rubicon begins a three-book series that picks up right where Erik Wecks’ critically acclaimed novel Aetna Adrift left off. This military space opera starts with a bang and keeps building tension until it explodes into an action-driven second half that will keep readers glued to their seats. It features Wecks’ trademark action scenes with characters who aren’t simply cardboard cutouts. They make mistakes, and those mistakes have consequences, not only for themselves but for the galaxy as a whole.

Want to Buy The Far Bank of the Rubicon? Go to his Amazon Page.

A full time writer and blogger, Erik Wecks lives in Vancouver, Washington. He is an author of both non-fiction and fiction, as well as a contributor to the GeekDad blog and LitReactor.com.

“I write on a wide range of topics. When not waxing poetic on various aspects of fiscal responsibility, I tend toward the geeky.”

“When not poised over the keyboard, I love to spend time with my family. I am married to an angel, Jaylene, who has taught me more than anyone else about true mercy and compassion. We are the parents of three wonderful girls. As a group we like swimming at the local pool, gardening, reading aloud, playing piano, and beating each other soundly at whatever table top game is handy.” 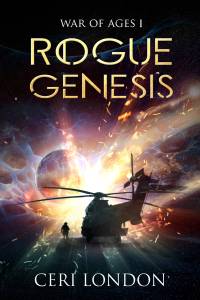