Terry Reid is twenty-five, based in Dumfries, south-west Scotland, and publishing her third book, CRASHING DOWN TO EARTH.

Your cover is amazing, Terry. I have an impression of clashing swords in the Scottish Highlands. Tell us about the story.

“My new book is called Crashing Down to Earth and is the first of a two part series. It follows a young woman called Hayley, who lives with her charismatic, and sometimes annoying, guardian angel, Alex, in Glasgow. Everyone can see Alex but his identity is a secret except to Hayley and a few close friends.

An ex-lover of Alex threatens to kill Hayley, but it quickly becomes apparent that there are bigger dangers coming their way.”

I know from Stars and Satellites, that Alex makes for quite a charismatic guardian angel, so finding out about a murderous ex from his past will be fun. What made you come up with an angel for a hero?

“The character, Alex the angel, was inspired by a dream I had several years ago.”

Sounds great! Even better, Terry tells me she is currently writing the second part to Crashing Down to Earth, so hopefully part two will not be too long a wait. Thank you for joining me, Terry.

Don’t forget to check out Terry Reid at:

Twitter: @AuthorTerryReid
Smashwords: My Profile
On Kindle: Stars and Satellites
On Kindle: Alchemist

Please help me decide on cover art for my debut Sci-Fi novel, ROGUE GENESIS (Shimmer in the Dark).

One cover is a view of Astereal, a planet on the other side of the universe. The other two represent themes in the novel. 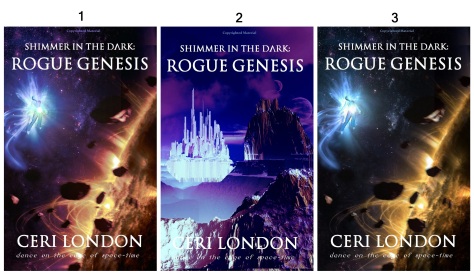 Don’t forget to check out my 5* reviews at Goodreads and my book blurb.

It is a weed. It smothers the true intent of a sentence. Dig it out and replace it with substance and beauty.

A great friend (who I’ve never met in person and lives Wyoming way) worked with me for the first six months of 2012 betaing my sci-fi/fantasy novel, Shimmer In The Dark, and I did the same on her epic novel, which is brilliant by the way. I’m waiting for the day she publishes so I can recommend it to anyone who will listen.

Shimmer In The Dark is in a good state, but I was worried about the pace. I still am. So I put it away for a few months and I’ve been working on other writing projects as well as learning about self-publishing. I got a little distracted with a building project, did some beta work for other writers, then my piano tuition business got busy, but I’m determined now to focus on getting Shimmer out there.

What is important to me is that self-publishers retain control of their work. Plus they can buy expertise in if they wish and keep a higher percentage in royalties. It’s also a good way to build a platform, establish a readership and fanbase that could attract publishers to future projects. More and more agents and publishers are viewing self-publishing as a means to vet potential prospects.

So I’m going to get my feet wet and just enjoy being a published author, whatever the future holds for my future literary endeavors. I hope you join me along the way.